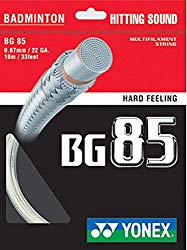 The Yonex BG85 badminton strings are quite good in terms of power. I’ve strung it on my Yonex Duora Z Strike at 24 pounds (check out how you should choose badminton strings and article) and definitely feel really decent power coming out of these strings.

My smashes and clears have all been of pretty good power using the Yonex BG85 badminton strings.

Yonex rates the BG85 strings at a repulsion power of 8, which is among the best for power in their ratings. I definitely do feel like my shots are stronger on these strings compared to the Yonex BG65. The multifilament string material and the 0.67 mm thickness has provided me some good results.

However, the Yonex BG85 badminton strings are not as good in power as something like the BG66 Ultimax or the Aerobite strings. The little bit of extra oomph is missing.

So the Yonex BG85 performs reasonably well in terms of power, but how well does it do in control?

Yonex gives the string a rating of 7 in control, and I did the same. The control on the Yonex BG85 strings also performs decently. When I play net shots and drops, I do perform reasonably consistently.

What I like about this string is its hitting sound. Although it is an opinionated factor, as a string branded as an excellent hitting sound string, the high pitch sound that it makes when the shuttles make contact with the racket is a nice sound knowing that I hit it.

The extra thickness of the string makes it a lot harder to control the shuttle than the Yonex BG66 Ultimax. The shuttle will still go where I want it to go, but it isn’t as tight to the net or line as I want it to be.

But there isn’t much else to talk about this string. Both the power and control are pretty good, but the BG85 just lacks the little bit of extra to make it better.

But where did all that extra go? Into the durability. You may have noticed that I compared it a lot to the Yonex BG66 Ultimax badminton strings. Yonex actually made it as a variation of the Yonex BG66 (not Ultimax) strings and just added some thickness to it.

This added thickness reduced the power and control of the string, but it improved the durability drastically. So far, it’s been about 6 months, and I haven’t had to restring my Duora Z Strike yet.

I don’t see any strings starting to break in the racket either which is quite a surprise. I haven’t been playing as much, however, so I have yet to test the full extent of the string’s durability. But so far, the extra 0.02 mm of thickness compared to the Yonex BG66 Ultimax and then Vectran material of the badminton string really does make a difference.

This string is also pretty good at retaining tension. Throughout my months of playing with this string, the loss in tension is hardly noticeable except for the initial drop after the first stringing. I found myself still hitting just as powerful and controlled shots throughout my time using this string.

Its durability is really quite excellent and deserving of a high rating of 8.5 out of 10 despite other people putting this string’s weakness as the its durability.

Want this string? Get your own packet of Yonex BG85 badminton string here at Amazon.com!

The Yonex BG85 perform decently in terms of power and control. Neither is, and neither is the best I’ve seen. It does sacrifice that special quality of shot for exceptional durability, making it a great purchase. Usually the price averages between $10-$20 USD around the same as all the other strings.

Any questions or comments? I would love to hear what you have to say about the Yonex BG85 badminton strings or anything else! As always, good luck in your games and have a great day! 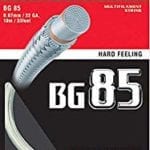